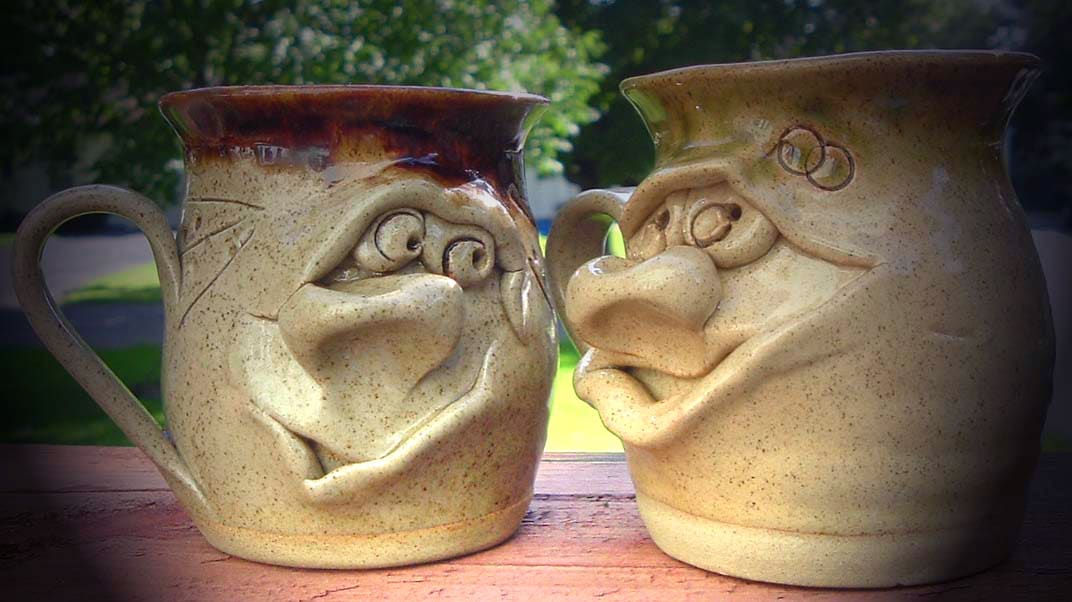 Ah, to be young and foolish. In one fell swoop, Jenny had learned that history repeats itself, and she was therefore resolved to never again put her cart before the horse and to always look before she leaped…

When she was a little less long in the tooth and still a babe in the woods—before learning that all that glitters isn’t gold—Jenny’s biological clock was ticking. But she was single, and because the big clock, too, was ticking, she was like a coiled spring, as nervous as a long-tailed cat in a room full of rocking chairs that she wouldn’t be able to keep up with the Joneses.

All bets were off when the best thing since sliced bread moved in next door on a day that was cold enough to freeze the balls off a brass monkey. He was hotter than Georgia asphalt with bright baby blues, and while she firmly believed you couldn’t judge a book by its cover, she just sensed he was as honest as the day was long. She called her friend Helen, a woman with a heart of gold who would give anyone the shirt off her back, to tell her all about her plan to get a bun in the oven.

“You could have knocked me over with a feather when I saw him walking around out there, big as life,” Jenny said to Helen, who’d driven over at the drop of a hat in spite of the bone chilling cold. “He’s the cat’s whiskers. I’m telling you, Helen, compared to him, everyone else I ever dated was child’s play.”

Helen stood up to look out the window and muttered, “Bet your bottom dollar.”

Jenny stood, too, and watched happy as a lark as the new stranger got to the business at hand and lifted a recliner over his head, strong as an ox.

“Oh, I’ll be busy as a bee and burning the midnight oil until I come up with the perfect way to meet him,” Jenny said. “You can take that to the bank.”

Helen sighed like there was no tomorrow. “Always the bridesmaid, never the bride.”

“Oh, you can’t swing a dead cat without hitting a man who wants you!”

“All in due time,” Jenny said, putting an arm around her friend.

The following Saturday, at the crack of dawn, Jenny dressed to kill and was climbing the walls waiting for signs he was awake. She was hungry as all get out, too, but she didn’t want to be asleep at the wheel when her chance came to speak to him; catching him off guard was her ace in the hole. As she watched his house like a hawk, she could almost hear her mother say, “A watched pot never boils.”

“Zip your lip!” Jenny said to no one.

She was almost at the end of her rope when a light finally showed in his window and glowed bright against a sky as black as coal. Jenny, with butterflies in her stomach, bit the bullet and put on her coat. No one would ever accuse her of being all talk and no action.

Jenny locked her door from the inside, stepped outside, and shivered in the morning as cold as a witch’s tit. She closed the front door behind her and hurried to the house just a stone’s throw away and rang his doorbell, then waited with baited breath for him to turn the knob. (She would have given an arm and a leg for summer.)

When at last the door opened and he stood there tall, dark, and handsome, she felt like a deer caught in headlights.

“Well, aren’t you pretty as a picture,” he said.

“I’m afraid I’m all thumbs,” she said. “I stepped out to shovel the walk, and all that jazz, and I locked myself out.”

“You being above board?” he said, looking at the woman in front of him who was dressed to the nines.

“Ask me no questions and I’ll tell you no lies,” she giggled.

“You know, an ounce of prevention is worth a pound of cure,” he said. “You ought to keep a spare.”

“I had one for the longest time, but I’ll tell you, it ended up being about as useful as tits on a bull.”

“Back’s against the wall now, though, ain’t it?” he smiled.

“Oh, silly. Stop yanking my chain and help me in, won’t you? It’s colder than a well-diggers ass out here.”

As luck would have it, the stranger, whose name was Winston, had bitten off more than he could chew and wasn’t able to break into Jenny’s house.

“I’m afraid I’m up a creek without a paddle,” she said, warming her hands around a cup of coffee at his kitchen table.

“Oh, keep your shirt on,” she said, standing and walking toward him. “On second thought…”

After a satisfying game of hide the salami with Winston, Jenny called Helen, who had a key to her house.

“I suppose all’s well that ends well,” Winston said, tucking in his shirt.

She winked at him. “When life gives you lemons, make lemonade,” she said, but she was still nervous as a cat on a hot tin roof about marriage and kids. She wanted the whole nine yards, and come hell or high water, she would have it, and she would have it with this kind, tall drink of water.

“Winston, you should know I’m not a one night stand,” she said. “The long and short of it is that I’m in love with you. I want to be with you, lock, stock, and barrel.”

“And here I thought I was over the hill.” He scratched his head and said, “Welp, I guess even a blind squirrel finds an acorn once in a while. I feel like I’m making out like a bandit.”

Together they laughed, each looking at the world through the same pair of rose colored glasses.

Three months later, the baby in Jenny’s belly was growing like a weed, and Winston was working his fingers to the bone twenty miles away as the crow flies. It was when Jenny felt snug as a bug in a rug that all hell broke loose when Winston didn’t come home one night.

“Another day another dollar,” he mumbled when he stumbled in the next morning.

Jenny was madder than a wet hen and refused to ignore the elephant in the room. “Any port in a storm, you mean!”

“Don’t get all bent out of shape, now. I know you’ve been home with nothing to do and that an idle mind is the devil’s playground, but I’ve been working like a dog.”

“Are you a man or a mouse?” she screamed. When she saw Helen’s signature lipstick color on Winston’s shirt collar, she fell into the clutches of the green-eyed monster. The writing was on the wall: Winston thought the grass was greener on the other side.

“A good man is hard to find,” Jenny wailed before dialing Helen’s number.

Even though Jenny had invited her, Helen’s arrival was about as welcome as that of a skunk at a lawn party. But she was caught between a rock and a hard place, and she had to take the bull by the horns.

“Aren’t you a sight for sore eyes,” Helen said, grinning from ear to ear.

Jenny stood stiff as a board.

“Cat got your tongue?”

“You’ve already got one paw on the chicken coop,” Jenny sneered. “A little bird told me about you and Winston.”

“I have bent over backwards to be a good friend to you, and you pull the wool over my eyes with my own Winston. You make my blood boil.”

The sky grew dark and it started to rain like a cow pissing on a flat rock. At the end of the day, Jenny knew it was all over but the crying.

“Look,” Helen went on. “That’s the way the cookie crumbles. All’s fair in love and war. Now, I’ve been in love with Winston since the night you put the first nail in the coffin by lying to him about locking yourself out of your house. So, cry me a river. We’re birds of a feather, you and me. I know your game. You dangled your carrot in front of him, and he cried uncle, but now he’s mine. The early bird catches the worm, but every dog has his day, my friend. That man couldn’t hit the broad side of a house, couldn’t fight his way out of a paper bag, and doesn’t know what time it is. Let’s face it: he’s not the brightest crayon in the box. But I am head over heels for him. He gets me horny as a three-peckered Billy goat and makes me feel high as a kite. Oh, and another thing:  since day one, we’ve been joined at the hip. How’s that for a topper? I never met a man I didn’t like, little Jenny, but until Winston came along I also never met a man I loved. I’ll leave you with something to chew on, and I urge you to sit down right now because I bet you dollars to donuts I could whip you with one arm tied behind my back: There’s no use crying over spilled milk. You’ve got to get back on that horse and remember that a journey of a thousand miles begins with a single step. Jump in with both feet. It’s not over til it’s over, and you’ve got that baby to think about, and isn’t that better than a kick in the teeth? Keep your chin up, sweetie. Keep your sights on the light at the end of the tunnel.”

Jenny knew the score. By letting the cat out of the bag, she’d ruined any chance of keeping Winston. She would let bygones be bygones, let sleeping dogs lie.

And she would remember, for donkey’s years and until the cows came home, that good fences make good neighbors.