The Age of the Child 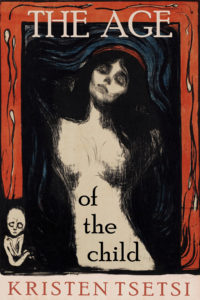 “What makes the story compelling is how Tsetsi leads us through this world […]. When we are through, we are thinking hard. We’re tempted into a conversation that we’ve not had with spouses, friends, or acquaintances.” Elizabeth Marro, author of Casualties

“A masterstroke in the dystopian revival, The Age of the Child is visionary, relevant, and unnervingly plausible.” Brian Felsen, founder of BookBaby

“As I read The Age of the Child, I kept wondering whether author Kristen Tsetsi might have been channeling George Orwell on LSD. … Tsetsi tells an engaging and unsettling story that is no longer that improbable and that will keep you reading and wondering late into the night.” James C. Moore,  author of Give Back the Light and co-author of the New York Times best seller Bush’s Brain: How Karl Rove Made George W. Bush Presidential

A repeal of Roe v. Wade has unanticipated consequences that take a surprising turn from one generation to the next.

The Year of Dan Palace

“At turns funny, smart, painful, and honest as it follows one man’s choices in the face of the possibility that the world will end. This is a writer who doesn’t pull punches, who shows us sides of a character it might be easier to turn away from.” Reggie Lutz, author of Haunted

“From the opening pages to the unexpected ending, this book is amazing. This is not a book for a quick read despite the ever changing plot. It’s a book to savour and enjoy the beautiful clarity of the writing. I thought The Year of Dan Palace was stunningly good.” Indie Bookworm 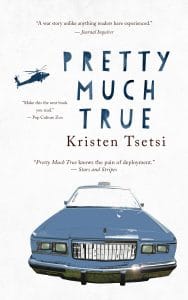 “There are few stories written from the point of view of a loved one back home waiting, and waiting some more, not knowing if or how the soldier will return home. Perhaps that’s because so few have found an interesting way to write such a story, but that has changed, thanks to Kristen Tsetsi. She doesn’t take sides on whether our previous president made the right decision with the lives of our men and women in the armed services; instead, she shows what it’s like to be paralyzed by fear, contrary to being strong for the country as an expected honorable sacrifice.” Carol Hoenig, Huffington Post

“A powerful novel with wonderful echoes of Vietnam and our country’s tortured response to that war.” Paul Griner, author of Collectors and The German Woman

“Kristen Tsetsi is the rare sort of writer who can satisfy both emotionally and intellectually. All told, Pretty Much True is a moving novel whose emotional and intellectual complexity demands much of the reader but offers much more in return.” Small Press Reviews

“In a style reminiscent of Kurt Vonnegut’s surreal narratives, Pretty Much True is a story revelatory of a side of war that often is overlooked.” Journal Inquirer

The semi-autobiographical Pretty Much True, originally released as Homefront, begins in early 2003 when the US is still reeling from–and deciding how to respond to–the September 11 attacks.

Mia, a 26-year-old cab driver and failed adjunct English professor, is desperately in love with Jake, a 101st Airborne Division helicopter pilot who, like many, assumes the floating speculation of a war with Iraq is nothing more than an absurd rumor.

It isn’t. Before long, Jake deploys, and Mia nervously watches from her living room couch as the televised Shock & Awe missiles pummel Baghdad. With an eye or an ear constantly on the news for the latest updates from embedded reporters or sensationalist talking TV heads hungry for soldier tragedies (great for ratings!), Mia is numbed by the fear that she’ll never see Jake alive again. Or that if she does, he’ll be on her TV screen, flanked on both sides by men preparing to kill him.

Interrupting Mia’s constant, yet comforting worry–he’ll only die if she relaxes, if she takes for granted that he’ll be coming home–is the formation of new and unlikely friendships: with Safia, a war-protesting downstairs neighbor; with Denise, the unfaithful wife of Jake’s frequent co-pilot and good friend, William; and with a charming alcoholic Vietnam veteran named Donny Donaldson–sensitive artist, subtle manipulator, crutch, and handicap. 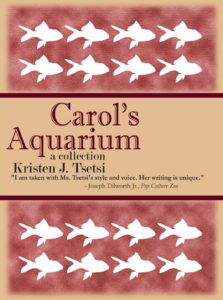 A biker wedding, Benjamin and Elaine after that fateful bus ride, a taunting prison visit, and real-life rather than rose-tinted love. Stories in this collection include Pushcart Prize-nominee “They Three at Once Were One,” fiction prize winner “Becoming an Oates Girl,” and fiction prize winner “Burn Everything but the Heart.” Some previously published, some appearing here for the first time, the stories come together in a series of fearless illustrations of the things that make us human.

“What sets Tsetsi apart from most writers is an ability to present raw, emotional moments in a way that allows you to personalize them. There are few books you will treasure and want to revisit the way you will with Carol’s Aquarium.” Joseph Dilworth Jr., Pop Culture Zoo

“One might go so far as to liken this collection to Dante’s Inferno, each character in a purgatory of sorts, placed there by the conviction of their own will alone. There isn’t a bad story in the bunch.” Cheryl Anne Gardner, author of Knowing Joe and The Kissing Room and head fiction editor at Apocrypha and Abstractions Literary Journal

Benjamin tugged the “stop” string after twenty blocks and looked at her. Past his head and through the window a dull blue motel sign advertised rooms at fifteen dollars.

“Just for now,” he said. “Why are you looking at me like that? It’s just a place to rest. … And to think. We should think, some, don’t you agree? A lot’s happened, and stopping here and resting, maybe getting some sleep, will clear us up.” He held his hand out to her. When she took it, she found that it was as dry as hers was damp.

“To My Daughter” ($0.99), also published in Carol’s Aquarium, is an uncertain mother’s private, silent message to her child. Originally published in the journal REAL: Regarding Arts and Letters, “To My Daughter” reveals the secret thoughts of a young woman struggling with new motherhood.

Women of your day will have the luxury of thinking about children. We, women of my generation, don’t put too much thought into it. We get married, get houses, get pregnant. A funny thing not to have an opinion about kids. You. I have no opinion of you.

Fiction, essays, and plays in other places

.The stories marked with a red asterisk are included in Carol’s Aquarium.

“Owning is Second to Knowing” at NPR’s “This I Believe”

They Do Exist!: Anthology of Award-Winning Short Stories
“But for Gloria”

RE:AL, Summer/Fall Issue (also a Kindle Short)
*“To My Daughter”

Thunderclap
“Married to Somebody”

The Midtown Literary Review
“In the Wheatfield”

Expository Magazine
“The Nature of Things”

Story Garden 7
*“Carol’s Aquarium”
“Mexican Blanket”
“Fate, or What Have You”

Tryst3
*“An Agate in Cool River”

Six Sentences
“Killing People Is an Art,” He Said
“Trial Separation”
“The Start of Resentment”

Six Sentences
“Things You Do for Love”
“Criminals Today”

The Fargo Forum
“Other Views: Human Body Should Not be Unmentionable”

Overdue Karma
“Tide Is In”

Journal Inquirer
“They’re Not Kidding: Childless and Loving Every Minute of It”
“Clearing the Air: a first-time visit to the Church of Scientology”
“Dehumanizing women in advertising”
“Write On: The ups and downs of self-publishing”
“Lifetime’s Desperation Could Kill Its Cash Cow, ‘Army Wives'”
(op-ed) “The Rape Trail: America doesn’t get it,” by Kristen J. Tsetsi, Stacey A. Silliman, and Laura F. Alix
“Breast Implants: A Complex Decision”

Theatre of the Invisible Guest
“Girl on a Swing,” One-Act
“Gun in the Corner,” One-Act

“Right, Like a Man: The power of gender in an author’s name” at Read Her Like an Open Book
“My first time” at The Quivering Pen
Real Women’s Bodies