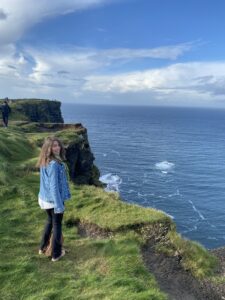 The post-Roe v. Wade  The Age of the Child is her latest novel. Called “provocative” by The Baby Matrix author Laura Carroll and “scathing social commentary” by a Goodreads reviewer, The Age of the Child was the focus of an episode of NPR’s “The Colin McEnroe Show” and, according to reviewer J. S. Crail, promises to “rile up your book clubs.” (“Perfect for book clubs,” agrees Casualties author Elizabeth Marro.)

Her first novel, the independently released Pretty Much True (originally Homefront), was included in Saint Joseph’s University professor Dr. Owen W. Gilman, Jr.’s “American War Literature and Film: Vietnam to Now” 2012 course curriculum and is one of the contemporary works studied in Gilman’s The Hell of War Comes Home: Imaginative Texts from the Conflicts in Afghanistan and Iraq, a wide-ranging collection that includes creative nonfiction and journalism, film, poetry, and fiction.

Kristen’s second novel, The Year of Dan Palace (published under the pen name Chris Jane), has been called “stunningly good” by Indie Bookworm and “impossible to put down” by Pop Culture Zoo. One Amazon reviewer expressed impressive hatred of it.

Her short fiction has won the Storyglossia Fiction Prize and has been nominated for a Pushcart Prize. Her short story collection Carol’s Aquarium, which includes prize- and award-winning stories as well as some that were previously unpublished, is available here.

Kristen contributes regularly to the writers’ and publishers’ resource website JaneFriedman.com, primarily with a series of interviews with writers and others in the publishing industry. She’s also the creator of Obitogy.com.

“Why Chris Jane?” answered at Read Her Like an Open Book.