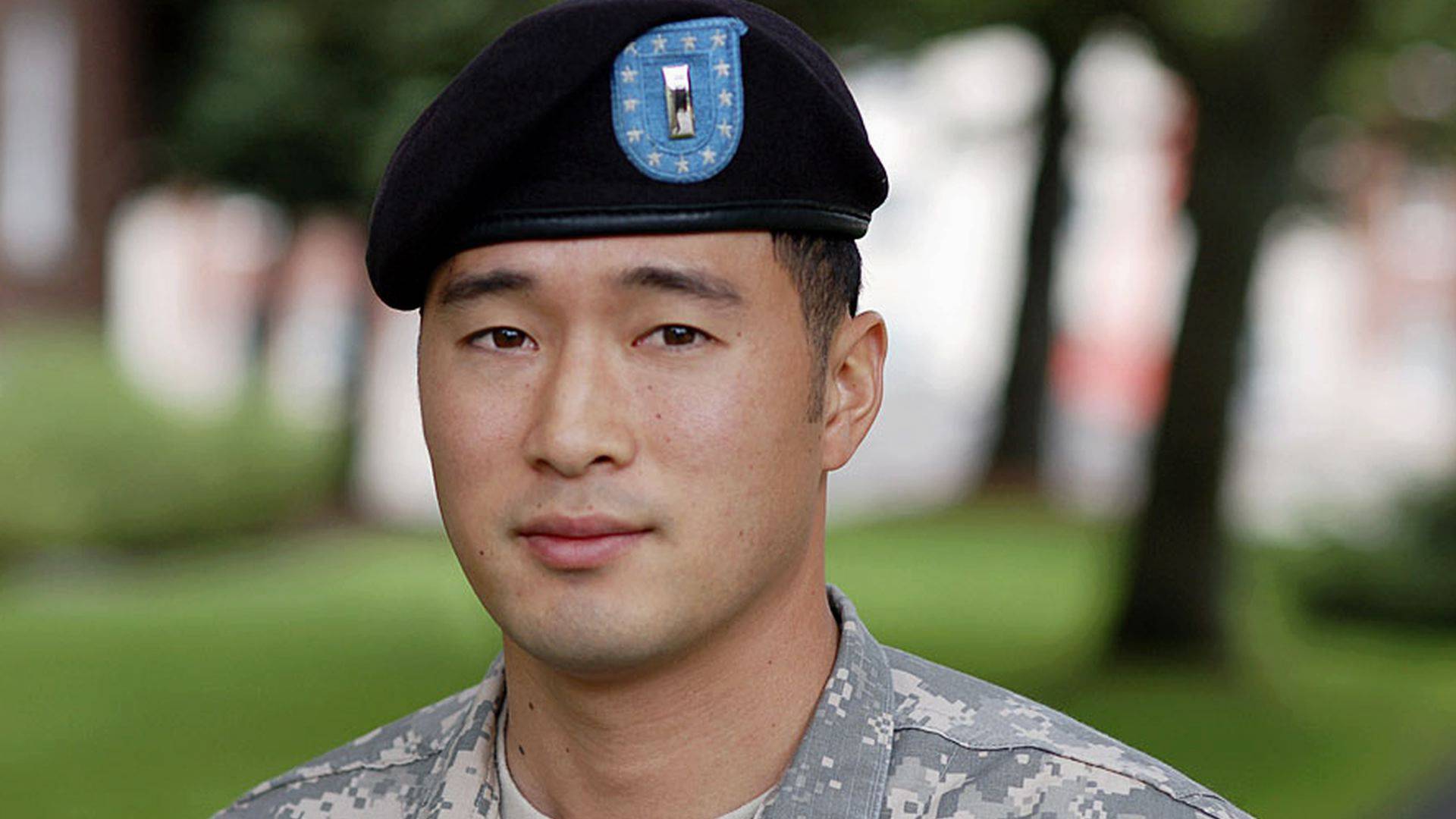 I visited a small protest years ago in Rochester, NY outside of a downtown recruiting office. The protest was in support of 1LT Ehren Watada, who refused to deploy with his unit to Iraq. (Wiki article on Watada.) I wanted to know what both sides thought, so I talked to the protesters and the recruiters (separately, of course…it seemed never the twain did meet for any kind of meaningful conversation – even if maybe they should have). Afternoon city walkers, most in ties and black shoes, scurried with coats held closed around them in blowing, four-degree winds. Standing on the corner under an Atlanta Bread Company sign, a cluster of six students–homemade signs and rolled-up banner clutched tight to their bodies–waited for the flash of the “walk” sign.

The light turned and they thrust forward into the wind. The leader stumbled and fell in the crosswalk and his friends bent around him (they would help if they could, but Man, we’ve got these signs). He waved them off, tried to get up, slipped, and tried again, making it that time. He and his buddies made their way to the opposite sidewalk and gathered in a huddle and pointed out there. They walked the quarter-block to where the town’s blue-collar workers, noses hidden by high nylon coat-collars and heavy face-masks, waited for a bus at the pick-up point outside of the Armed Forces Recruitment Offices.

The group turned their backs to freezing winds and unrolled their banner and prepared their signs. They were ten minutes late, but it didn’t matter. They’d tried to increase their numbers by sending out a mass email–“We call for all groups and individuals to join us and raise awareness of Lt. Watada’s case. Building an antiwar movement that is open and supportive of soldiers who speak up and follow their conscience is a crucial part of ending this war. We will do our part in a national day of action on Mon, Feb 5th, 4pm at the Main St. Recruiter station.!”–but no one waited. It would be only the six of them. SUPPORT WATADA! read the banner. SUPPORT SOLDIERS AGAINST WAR! read a sign. They didn’t shout, didn’t chant a slogan. It was too cold. They shifted from foot to foot and sniffed and patted their hands.

A recruiter wearing a small blue sweater and fitted pants, no jacket, stepped out through the doors and folded her arms and stood with them. “So, what are you all doing here?” she said, bouncing to fight the cold.

One of the group members explained Watada’s case, the protesters’ reason for choosing a recruiting office. The recruiter smiled, sort of. “Well, everyone’s got a right to their opinion. To each his own,” she said. She shrugged and shook her head and went back inside. Where it was warm.

“I don’t know how long we’ll stay,” said Ken, who seemed to be the group’s leader. He used one hand, the one without a glove, to adjust his black face cover. His friend had forgotten his own gloves, so they were sharing. “It’s pretty cold.”

“Ken, man,” said his friend. “You mind if we switch sides with this banner so I can warm my other hand?”

They shuffled a switch, banner-ends changing hands, and pulled it as straight as they could in the wind. A passing car honked and one of the protesters, a young girl of sixteen with pink cheeks and an ice-cream smile, said in her small voice, “Support Ehren Watada!” She giggled.

Two young men, both in gym shorts and baseball caps, came out of the recruitment office and folded their arms at their chests and watched the small rally. They tilted their heads, talked quietly to one another.

When asked again why he was standing outside of a recruiting office, Ken said, “It makes a statement. It’s the only place with a real, active duty military presence.”

“Do you think it’s a little odd to be in support of a soldier outside of a recruitment office where people come to make themselves soldiers?” I asked.

Ken handed his end of the banner to a member of his group and stuffed his hands in his pockets. “Recruitment centers are responsible for keeping this war going. They lie to people to get them sent to Iraq.” He sniffed.

The two young men were stomping their feet, now, to keep warm.

“Saying they won’t go to Iraq. That they’ll get certain jobs that they don’t end up getting. Selling them dreams they’ll never see.”

“I thought you were here for Watada.”

“We are.” Ken pressed his hat to his ears. “Absolutely.”

The two young men shivered, nodded to one another, and went inside.

“Did you know we’d already gone into Iraq when Watada joined the Army?”

Ken looked at the sidewalk, then up again. “No. I don’t know about any of that. But it doesn’t matter. Even if he did, we still support his decision to stay out of an illegal war.”

“But he knew we were there when he joined.”

“Well,” said Ken. He wiped his nose with his glove. “There are countless stories on the news. Recruiters caught on tape lying. One told a kid no one was even being sent to Iraq, anymore. That people were all coming home. And they prey on the underprivileged. They go to schools, like high schools and middle school in less fortunate areas.”

In answer to a question about the presence of other businesses hoping to sell high-schoolers on their own companies, Ken said, “Yes, sure, but they aren’t sending them off to die.” While having to admit the military is, indeed, an all-volunteer force, Ken made clear that he believes recruiters deliver their pitch in such a way that the less fortunate are convinced the military is their only hope, and that they don’t have the capacity to understand they’ll most likely be sent to war.

Army recruiters watched from behind the windows to their offices.

“We get protesters out here all the time,” one of them—who preferred his name and rank not be disclosed, so he’ll be referred to as Thompson—said. “They never really cause any problems. Except that one time.” He gestured to a fellow recruiter, whose desk faced away from the glass. “Remember that group with the cans? They were banging on them with something. It was really loud. That’s the only time I called the police. We really don’t mind so much that they set up out front as long as they don’t cause a disturbance.”

“Oh, sure. Wait–” Thompson rocked in his chair. “There was also that time they had a coffin out there. Remember that?”

“They even left it there, didn’t they?” The other recruiter was standing in the middle of the office, hands in his pockets, and looking out the window. “We don’t know why they do it here, though,” he said. “We’re only a block away from the Federal Buildings. Seems like it’d make more sense for them to go there.”

“Or,” said Thompson, “they could even protest at RIT. They have those ROTC offices there.” He shrugged. “Makes no difference, though.”

Outside, the protesters held scarves over their faces and waved at passing cars. A younger boy with dark curls dropping out of a thick, knit cap carried a small cardboard square with “Watada” written on it in black marker, “da” covered up by fat mittens.

“As for only visiting schools in a lower economic bracket,” said Thompson, “that’s simply not true. We’ve been to the U of R. RIT. Elmira. Those aren’t underprivileged schools.” The cell phone sitting on his desk rang, loud in the quiet office. He picked it up, looked at the number, and set it aside.

A man of about eighteen appeared in the doorway. His jeans hung long and loose and had images of boots sewn or painted onto the knees. He jutted his chin at Thompson and said something, but quietly. Unintelligibly.

The other recruiter excused himself and squeezed through the doorway.

“How will I know if I got in? Will they call me?” His accent was strong, and he hadn’t raised his voice.

Thompson squinted at him, thought for a moment, and tried: “What, you want to know if you’re in the Army?” He smiled. “Believe me, you’d know. You’re not in the Army.”

The man shuffled, smiled, nodded thanks and walked down the hall.

The other recruiter returned and held up four fingers.

On the other side of the window, Ken returned to his spot, reclaimed his end of the banner. He beckoned to the others and shook his head. Through the glass, a muffled, “Watada! Support Watada!” from the smiling girl at the side of the road. The others held up their signs for passing cars.

When asked about recruiters caught lying to, and tricking, potential enlistees, Thompson said, “The Army is big, and it’s human. There’ll be people who embarrass you, make you look bad. But look at how many recruiters we actually have.”

“Thousands. It’s unfortunate—a real shame—that some of them lied. It’s wrong. I’ve had people come in—not often, but once or twice—to yell at me just because I’m a recruiter. You know, ladies off the street, or whatever. But you know what? They can’t hate me. I haven’t done anything wrong. I’ve had 600 enlist through my desk, and not one has come back to accuse me of lying. When they come back after basic, they thank me. I tell them like it is, tell them what to expect.” He leaned back in his chair and used a thumb to slide his laptop just a bit to the left. “You know,” he said, “the Army is offering a $40,000 enlistment bonus. You ever thought about joining?”

“What do you want to do?” said Thompson. “They have every job in the Army.”

But what about those who don’t get the jobs they’re guaranteed?

Thompson clarified, “You gotta pass the test. You apply for the slot, but you have to do well in that area. If you don’t, you get something else.” He plucked a pencil from a cup and picked at the eraser. “Why? What do you want to do? What would it take, what would I have to say, to get you to join?”

“Guarantee I won’t be sent to Iraq.”

He shook his head. “I can’t do that. But I can ask you this: how do you know you don’t want to go to Iraq? You ever been there?”