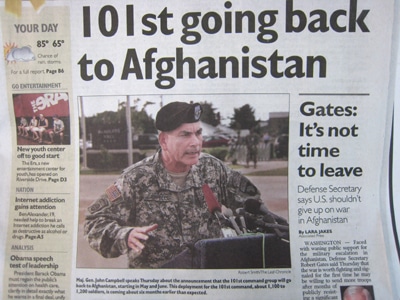 Once upon a time, when Pretty Much True was Homefront and published under my own name, I was talking with the guys on GI Radio and was reminded of one of the awkward – and difficult, really – aspects of sitting at home while someone you love is deployed.

In your mind, you’re comparing hardships.

And everyone knows who has the “worse” hardship.

While discussing Homefront, the producer had me pause for an incoming phone call from David Whittaker, a wheelchair-bound veteran traveling from Florida to Blaine, WA in a quest to draw attention to homeless vets. Whittaker has only partial heart function. His doctor said he shouldn’t make the trip. “It’ll kill you,” he said (according to show producer Tom Graver).

When the call ended, Tom said, “And now, back to talking about Homefront.”

How could I, without feeling like an ass, go back to talking about Homefront after hearing this conversation with a wounded veteran making his way across the states in a wheelchair to help homeless vets? How could I talk about the experience of those at home as if it means anything when compared to these service members coming home without legs and arms, without their mind as they know it in some cases, and who – to boot – are said to have enormous difficulty getting the help they need from the government?

This comparing of hardships happens during deployments, too. One of the many things that makes waiting such a mind-f**k is that no matter how anxious/bad/worried/depressed/worried/scared/anxious/bad (all such inadequate words, by the way) you feel, you also feel like talking about it makes you a whiner.  You’re sitting at home, safe, eating cake and ice cream, and you’re complaining – because what, you’re sad? –  while many of the deployed are engaging in urban warfare, driving by objects on the road that may or may not be IEDs, not sleeping for days, and seeing their friends killed?

So, not only are you, at home, thinking about the person you love and remembering the last time you held his or her hand or saw his or her smile and wondering if you’ll ever get to see them again – alive, in one piece, or mentally whole – but now you’re also thinking you don’t have a right to “complain” about how you’re feeling. Because you’re not fighting a war. You’re not being shot at. So, really, you should suck it up and quit feeling sorry for yourself.

The thing is, the comparison game is stupid. That deployed service members go through what they go through doesn’t mean their experience is the only experience, doesn’t mean they’re the only group affected by war. Anyone intimately involved with a war goes through their own personal hell – and it doesn’t matter whose is “worse,” whose is more this, more that. One experience doesn’t automatically trump the other’s relevance in terms of discussion and exploration.

I did feel incredibly silly – inconsequential, whiny even though I wasn’t whining – continuing to talk about Homefront after the call with Whittaker, and after hearing about other disabled vets struggling to get assistance. Because I know their troubles far surpass most of those of the ones left waiting. But I had to remind myself that hundreds of thousands of men and women are worrying every second of every day that the person they love will suffer something unimaginable, or won’t come home at all. And that in itself is an intense and psychologically complex fear to have every second, every day. One that is only compounded by guilt for feeling anything at all.

Even so. I was on the air, live, broadcasting to the Pentagon, even, and I was being asked to talk about Homefront. So I just kept on talking. And I  tried to give the confidence to my voice that would only truly come to me about ten minutes after the call ended when I reminded myself that yes, absolutely, their story, the one of those at home, is an important one, too.