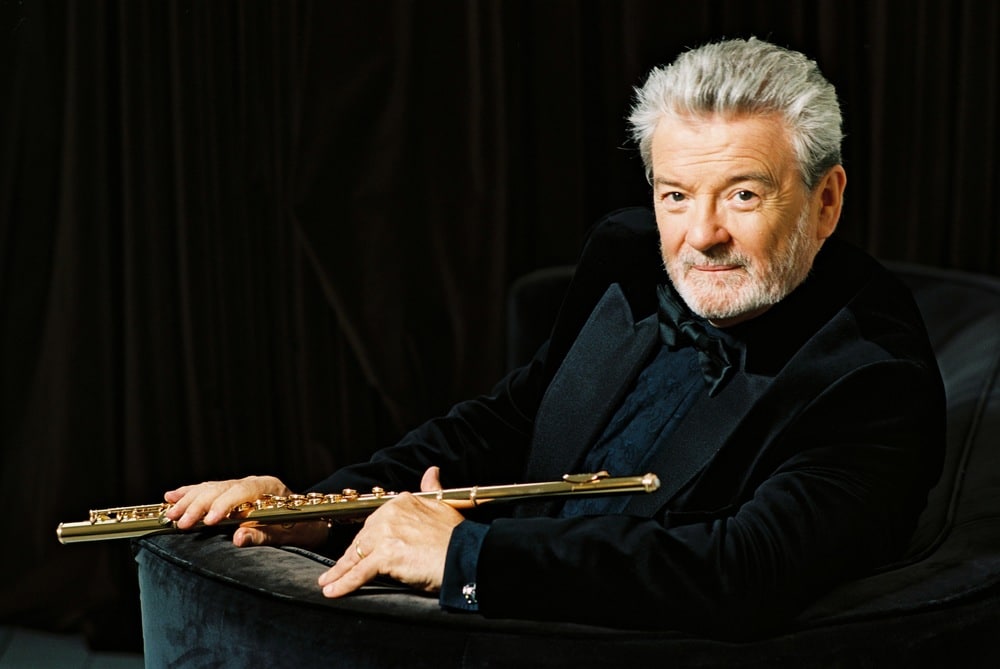 Sir James Galway has been called the “man with the golden flute,” the “living legend of the flute,” and a “supreme interpreter of the classical flute repertoire.” Many artists or performers might “Aw, shucks” their way out of such titles, but not Galway, awarded a National Concert Hall Lifetime Achievement Award in Ireland earlier this month.

“I’m still the best flute player in the world,” he said from his home in Switzerland. “Of that there’s no question in my mind when I listen to these other pretenders.” He laughed when playfully praised for his humility, then said he was only telling the truth, that he’s simply in a different category. Still, he said he was surprised to have been selected for the award, calling it a “very special thing.”

“My wife kept it a secret from me. I said I’m never going to trust her again,” he laughed.

His wife, Lady Jeanne Galway, an accomplished flute soloist and a chamber musician, joins her husband on his 35th Anniversary Tour. With his wife, Galway will play a variation on a piece by Irish harp player Turlough O’Carolan. He’ll also perform Hamilton Harty’s “In Ireland” and Mozart’s “Flute Concerto in D Major,” which he said he has recorded three times in his life and has improved upon each time, having by now “gotten pretty good at it.” In fact, aside from the music and the entertainment value of the program, what should draw an audience, Galway said, is the fact that he’s so good.

When he talks about his skill, however, he seems less impressed with himself than he is with the value of hard work and dedication to practice. His method is one that requires not only time, but a willingness to truly know the instrument rather than simply play the notes. Someone who is practicing the flute should not just practice the licks, he said, but the scales. And when playing scales, he added, don’t play one or two octaves, but scales that “encompass the entire flute.”

“A lot of people use a method that is geared toward the American way of thinking. For example, in America they’re all trying to have a shortcut to success, and that’s it. There is no shortcut,” he said. “By the time I got my first job, I had 11,800 hours of practice. And that’s a conservative estimate.”

Initially inspired as a child by his flautist father, grandfather, and uncle, Galway quickly learned that he enjoyed mastering new levels of playing, and his desire to improve had him picking up the flute whenever he could. Although he now appreciates the flute as a “natural” instrument whose sound is made by the person instead of with the use of a reed, he is also still very attracted to the challenge it presents. He practices not to play any certain way or like any certain person, and not to maintain a steady skill level so he can perform adequately, but to consistently get better.

“I like being good. I like succeeding,” he said. “I practice to develop something, and it shows when I play.”

Galway isn’t only interested in bettering his own skill; he is also a mentor and teacher who believes it’s most important to reach people when they’re young. Too many, he said, are spending time texting on their cell phones and iPads, sending such inane messages as “I’m walking down the street.”

Galway’s most recent teaching experience was in Dublin—“I don’t see any reason why with all this Irish talent around we couldn’t produce good flute players there. You don’t have to go to Julliard to play the flute,” he said—and he’s now working on an internet flute instruction course, First Flute. It launches this fall at FirstFlute.com, indeed making it possible for anyone, anywhere, Julliard or not, to learn to play the flute.

The 15-lesson tutorial, which Galway said begins with how to hold a flute and how to treat it with the fingers, is an idea he has had for a long time as a way to pass on his knowledge and experience.

“It’s not just the kids who will benefit from these 15 lessons. They’re packed with all sorts of good advice, which even advanced players could use and profit from,” he said.

Visitors to the website will see a short introductory video in which Galway shares a little bit about himself, his influences, and his own instructors, from whom he learned, “It’s the method, and not the teacher.”

Because the series cost approximately $250,000 to produce with quality sound, cameras, editing, and direction it won’t be free of charge, and Galway doesn’t yet know what the cost will be to subscribe. However, he is confident the lessons will be worth the price. [Update: as of 2.8.19, the website offer is $99 for a 1-year account. Each year thereafter is $19.99 to renew access.]

“Looking at all the other people who are teaching (online courses), I’m really not impressed by any of them. When you see what you actually get, it’s a fraud,” he said. “I think people are getting bad examples. They’re not getting what people say they’re going to get. If anybody bought a flute, they could learn to play straight away using my lessons. We put in more work than the others guys.”