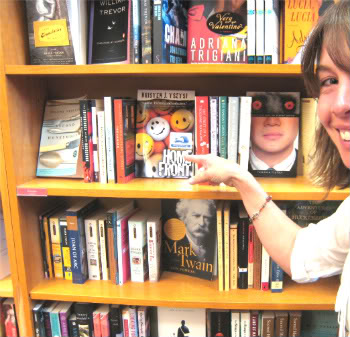 Note: This post was originally published at my old website location, but my opinions haven’t changed, so I moved it here. I don’t know whether Edan Lepucki’s opinions have changed.- K

In “Kill the First Novel? Are You Insane?” I responded to author Edan Lepucki’s decision to semi-permanently put away her first novel after it received a series of rejections. In her piece in The Millions, Lepucki touches on self-publishing as a possibility and then quickly dismisses it as an option (for her).

Later, in “Do it Yourself: Self-Published Authors Take Matters Into Their Own Hands,” Lepucki examines the benefits and pitfalls of self-publishing and presents a few ideas that beg to be addressed.

1. After being encouraged in the comments section of “Shutting the Drawer: What Happens When a Book Doesn’t Sell?” to give DIY a try, Lepucki decides to learn more about how effective it’s been for writers. She asks a couple of friends, Victor and Smolin, about their experience with it.

When I asked him about readers’ response, he said, “People have been very receptive and complimentary. Of course, most all of the books have been bought by people I know. What else would I expect them to say?”

When I asked how readers had responded, he said he hasn’t received any feedback. “But, then again,” he added, “I didn’t publish them for feedback.”

The first example is troublesome because, when used in an article published in a venue like The Millions, it perpetuates the stigma that has long surrounded self-publishing: “The only people who’ll read your books are friends and family. But, hey – so cute!”

The second simply supports the first. Implication: no one is reading you if you self-publish. (Not anyone who matters, anyway.)

Lepucki does go on to say, “Unlike many other self-published authors, they haven’t been tirelessly (some might even say obnoxiously) promoting their work,” which would explain why no one is reading it – they haven’t heard about it. However, as accurate as “some might say obnoxiously” is (everyone who tirelessly promotes themselves can be called obnoxious, from Jennifer Lopez to Justin Bieber), it’s hardly necessary to include, here, as – again, in an article such as this in a publication such as this –  it serves only to label self-published authors as pesky flies swimming around in the Celebrity Chef-prepared soup served to the Traditionally Published Authors.

One might point out to Lepucki that her articles are a fairly obvious form of self-promotion that will ideally give her new novel a better chance at traditional publication. There’s nothing wrong with it – I’m all for self-promotion, and I agree, it’s obnoxious, but calling it obnoxious in an article that ultimately comes out against self-publishing is in poor taste. Self-published authors are already the underdog, for the most part.

It’s important to point out that most authors published by traditional houses are also responsible for a lot of self-promotion (I know I’m not the only one receiving newsletters from bestselling authors about their upcoming appearances, new releases, and 50%-off sales.)

2. Lepucki says of her two friends quoted above, “It’s an intriguing contradiction: the desire to publish a book without an expectation for readers.”

It’s not intriguing, though, because she assumes a contradiction where none exists. To not publish your book because a publisher hasn’t taken it on is to have no expectation for readers. It’s certain: if you leave publishing to the publishers who are saying “no” to you, you will never publish, and you will therefore never have a reader. Your year or more of hard work will sit in a drawer because someone else hasn’t patted you on the head and said, “It’s okay for you to release this, now.”

If you determine through whatever channels you use that your book is good and is ready for readers and that waiting for a publisher to stamp “good enough for us!” on it is a tragic waste of time (life’s really too short for that) and you publish it yourself, you expect to have readers. Otherwise, you wouldn’t bother. And self-publishing gives you a much better shot at them than does hiding a manuscript in a drawer.

And yet, both Victor and Smolin maintain a hope for readership. In this regard, self-publishing provides the manuscript with a liminal existence — it’s technically available to the world, even if hardly anyone in the world is aware of it.

And they should maintain a hope for readership — unless, that is, they expect their work to do its own promotion. If they don’t engage in any of that obnoxious self-promotion, they’ll probably stay lost (thanks to Lepucki, though, their Amazon rankings probably saw a bump over the last couple of days, and from what she writes about their work, it’s probably warranted).

If Victor and Smolin aren’t making any efforts to promote their books, it isn’t self-publishing that’s failing them; they’re failing themselves. If you want someone to be aware of your work, you have to present it, and this is true no matter who you are or what you do. You can’t create a thing and set it in the middle of your living room and expect people to somehow sense it from the sidewalk, knock on your door, and ask to come in and see it.

4. But, if you create it and you show it to the public yourself, are you “cool”? Lepucki says no :

Okay, I’m just going to go ahead and say it: At this point in time, self-publishing lacks the cool factor. It’s… dorky. Go ahead, call me a snob (check), call me the mean girl (check). You can also call me someone who loves a well-made, beautifully designed book that makes me shiver with desire. To me, a good-looking book implies an understanding of the marketplace and how to maneuver within it…

I don’t know if it’s because I’m in my late 30s [edit: early 40s, now] that I find nothing at all appealing about snobs, mean girls, or those who would proudly admit to being either, but if it’s a snobby mean girl who is proclaiming herself to be the decider of what’s “cool,” I feel pretty okay about being “dorky” as a self-published author.

I agree that a good-looking book is more appealing. If it looks professional, you trust the content. If it looks like someone made the cover in an hour on their computer, chances are, you’ll think the writing is just as sloppy/amateur. A nice cover does imply an understanding of the marketplace – on the publisher’s part.

The problem is that self-published authors are, by definition, the publishers, so when they mess up the cover, they risk ruining their book’s chances.

Fortunately, the rise in self-publishing interest has meant a boom in designers ready to help authors create beautifully designed covers. (Of course, this is often not an option for those without design funds, so as in most areas, the less money you have, the greater the disadvantage.)

5. Lepucki continues with more on self-publishing and its coolness factor:

Two of my peers — Los Angeles-based writer Matthew Allard, and my former classmate at Iowa, Jason Lewis — have both published their own fiction, and made it seem hip to do so.

Basically, they did some savvy marketing. One created a limited edition, the other created a musical accompaniment to his book. I admire the ______ out of people who “get” marketing, who have these scathingly brilliant ideas that make people go “Oooh! Must have! Must have!” It’s a special skill, and not one all writers have, unfortunately. That’s probably the biggest reason writers want publishers and their team of professional marketers. All we have is, well, ourselves.

And if we’re not cool enough, I guess we have to do our best using traditional, less inspired means (radio, local TV, blog tours, publications willing to look at self-published work that’s been vetted, etc.) and hope the writing itself helps eventually.

6. Lepucki goes on to assume self-published authors all secretly want to be “accepted”:

Even writers who self-publish well, who successfully produce books that don’t fit into the publishing industry’s rubric of what’s marketable, let alone categorizable, still want entrance into the established world they initially turned away from. If only for assistance with production. If only to say, “My book’s for sale on the front table at Barnes and Noble.”

This is true. Publishers get you in more stores than you can get yourself into. Publishers’ logos get you taken seriously by big reviewers. That is a true value. However, if and when bookstores and reviewers (“Helloooo, New York Times!”) come around to considering vetted self-published work, publishers will instantly become less desirable. Yeah, we’re users.

7. Here, Lepucki seems to make the assumption that self-published authors are trying to circumvent rejection:

With my first novel, I suffered rejection from editors. The writer who self-publishes sidesteps that rejection, only to face possible rejection in the form of readers’ silence.

Many also have impressive backgrounds in writing, understand the revision process, seek out reader feedback before calling the manuscript “finished” so they can make revisions based on editorial suggestions made by trusted colleagues, and have – most of all – confidence in their ability.

Many writer friends have received very positive feedback from agents who have said, “I love this, really, but publishers these days…”

Surely there are those who self-publish without ever experiencing a single rejection (or getting reader feedback or making revisions or caring much at all about the work), but many don’t do it to escape rejection; they do it because waiting years for the “right” approval when any one of us could die tomorrow doesn’t make sense, anymore.

8. Lepucki concludes with the following:

Even so, I’m not running to the press with my first book. In a second essay, I’ll further explore why not. I’ll also examine what self-publishing means for readers, and what traditionally published authors think of all these D.I.Y. developments.

I sincerely hope Lepucki finds more than two readers to quote in her upcoming installment, because I too would love to know what readers think about self-publishing. I’ve seen both – readers who automatically assume all self-published work is terrible because they read two really bad self-published books in a row (and probably didn’t do much looking into the author beforehand, so they’re somewhat to blame – buyer beware), and readers who love the indie authors and passionately support them. I hope Lepucki’s piece reflects the spectrum of viewpoints while also – in the interest of fairness – pointing to some of the really bad books published by traditional presses.

I’m also interested to read what traditionally published authors will say, and whether she’ll approach those who were successfully traditionally published but ended up turning to self-publishing (can I nominate Dean Wesley Smith and James Moore?).  They would probably be the most interesting, and valid, perspectives to have (“What did you think about self-publishing then versus what you think now?”).