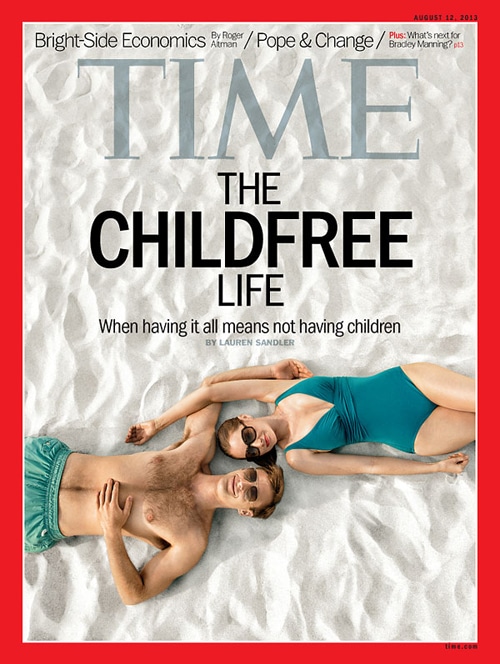 Last year I was visiting my childhood friend, now a mother, when dinner time arrived. She squirted ketchup onto her daughter’s plate and then her son’s. And then mine. I looked at it.

She immediately recognized her mistake and laughed. She knew I could squirt my own ketchup, she said, but she was just so used to doing it… She apologized (still laughing) for overstepping her role as “mother” by inadvertently mothering me.

This is where many women, such as Kathleen Parker in her recent column “Of pleasure and parenthood,” fail miserably when they say things, as Parker did, like, “it’s hard to know for certain that one doesn’t want children. Many don’t, until they do.”

They don’t recognize the mile-wide leap they’re making over that acceptable line when they preach to, question, or criticize women who don’t want children as if we are their children. As if we require their approval, seek their “wisdom,” or otherwise invite their perspective.

Parker suggests in her column about the “mommy-wars” that those writing about it (even before she picked up her own stick) were beating a dead horse, adding that whether women have children “is the only question left to those with first-world problems.”

This is a lovely oversimplification, and it would be nice if it were true; however, whether to have children is a full-world problem. In some nations rampant, instinct-driven baby-having leads to mass starvation and AIDS epidemics; in others, such as our idyllic first-world nation, it leads to the perpetuation of poverty and unfit individuals in all socioeconomic brackets abusing and neglecting their offspring to the degree of five dead kids a day.

On a level that doesn’t create a life-and-death situation for the children strangers so desperately want all women to mindlessly bring into the world, the push to procreate delivered by newspaper and television personalities with an audience of millions creates immense pressure in young women to live one particular kind of life. That it is somehow acceptable to imply in popular media that women who don’t want children are selfish, narcissistic, cold, unwise, immature, or silly adds to the pressure by communicating that they – we – are so unquestionably “wrong” that there should be no social barriers or general rules of propriety preventing this kind of open defamation.

But, let’s pretend for a moment that whether to create and form new human beings isn’t a monumental task best left only to those who truly want them – and who at the same time have considered the consequences and are fit to do the job – that the shark has indeed been jumped and that we should heed Parker’s advice (now that she’s had her turn) and stop talking about it, already.

I concur. And the people I desperately wish would stop talking about it are women like Parker who minimize the all-encompassing lifestyle that is motherhood by suggesting women choose not to bear children simply because it will change their bodies (how little she thinks of her own sex).

I would also like to hear less from women who, for whatever reason, feel it is their duty to mother those of us with no desire to be mothers.

You don’t need to ask us whether we’re sure about not wanting children. We’re every bit as certain or uncertain as you were when you decided you wanted to have children. We can make big-girl decisions just like you can.

You don’t need to tell us you worry we’ll change our minds later. We aren’t your responsibility.

You don’t need to fret that we’ll regret it, because – again, like you – we’re big girls who can look into the future with as much accuracy and confidence as anyone else. Your desire to have children or your role as a mother does not bestow upon you the gift of omniscience or wizardly wisdom.

“Parenting surely isn’t for everyone, and those who choose to be child-free probably have made the right decision,” Parker writes.

Yes. “Probably,” Ms. Parker. But don’t you not-so-secretly hope we made the wrong one?

The reaction to the TIME magazine cover depicting a happy childfree couple made painfully obvious that so much of this concern for the well-being of the childfree is far from “oops, I put ketchup on your plate” mothering. Instead, it’s utterly disingenuous, a barely-veiled expression of hope to someday have that moment of Schadenfreude.

Why else would it so burn them that the childfree couple could be so overtly – (sputter!) – so openly – (teeth clench!) – so unapologetically – (head explosion!) – content with their choice? Happy, even. No regret. No uncertainty. How dare they?

The mommy-wars will only end when we have enough confidence in our own choices to truly want others to be happy. Mothers, trust other women to know what they want just as you knew what you wanted. Be happy, and let them be happy, too.