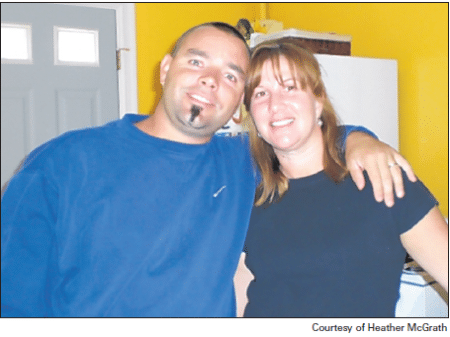 Heather McGrath of New London, Conn. says she has “serious road rage” as a result of a car accident she was in five years ago, when an elderly woman looking for her ringing cell phone ran a red light at 50 miles per hour and plowed her SUV into McGrath’s Pontiac Grand Am.

The Pontiac’s airbag inflated and compressed McGrath’s pulmonary artery, depriving her of oxygen. The 41-year-old suffered a traumatic brain injury, or TBI, as a result.

“I’m always pointing out bad driving, yelling, ‘Don’t you know you could hurt somebody?’” Heather says.

It took her four years, but she can drive now, as long as it’s local. And provided she’s the only one in the car, it isn’t raining (she tends to watch the windshield wipers), and it’s not the Christmas season (the decorative lights are a distraction.)

Judging by her voice, the quickness of her words, and the sharpness of her sense of humor, most would never guess that she has a brain injury, that everything in her life has changed, and that it takes ten medications — antidepressants, pain medication, headache medication, anti-seizure medication — to get her through the day.

Carrie Kramer, brain injury services director at the Brain Injury Alliance of Connecticut, calls brain injuries the silent, or hidden, disability and explains that those who recover from physical challenges, whose disability isn’t immediately apparent to others, can have significant personality changes.

“Even people who get back to as close as they were before are never really the same,” she says. “You’d be hard pressed to find someone who says they weren’t changed in some way.”

The Alliance works with many TBI survivors whose changes are so significant that the spouses can’t accept them. But there are also many couples who stay together after a TBI.

“And even for them, it’s a stressor,” Kramer says.

It’s a stressor Heather’s husband, Jason, was warned about shortly after her accident. He was told by a hospital worker that if the brain injury were something he thought he might not be able to handle, he could get out now guilt-free. Heather would never know the difference.

“I love her,” Jason says. “We got married. We started a family together. For me, personally, I can’t walk away just because of something that happened. I said ‘for better or worse.’”

But that doesn’t mean their marriage, which Jason says was “normal” before the accident, hasn’t been without its challenges. Asked how he would describe their marriage now, he says, “I don’t know. My wife isn’t the same person. I don’t know what to say.”

The change in her isn’t something easy for him to put a finger on. Many things about her are still the same, but she has mood swings (Heather calls them “blowups” and says she once yelled at a complete stranger in Walmart), sometimes fails to grasp certain banter or joking that before the accident might have elicited a quick retort, needs one day a week in a quiet bedroom, and can no longer pick up and go the way she used to.

“She was the type of person that would jump in a car and take off, and now she can’t,” Jason says. “She’d take the kids to Pennsylvania to see a horse show just because it was there.”

As a result of the accident, Heather also has short-term memory issues requiring her to follow a series of pictures in the morning so she doesn’t forget to complete a routine task, and injury-related obsessive compulsive disorder (“It’s the running joke in our family,” she says) that has her running through an extensive list before leaving the house. Bra: check. Keys: check. For a 10:30 a.m. ferry, Jason wakes her up at 6 a.m. and makes sure she stays on task.

“It’s been a long five years for him,” Heather says of the man with whom she wants to renew her marriage vows, the man who has accompanied her to support groups over the years.

But Jason, who just wants to move forward with their lives, won’t marry Heather, who’s been in his life since junior high, a second time.

“The people who get remarried or renew their vows are people who have trouble and need to prove something,” he says. “Even though she had an injury, I feel very strongly about that. Whether it would help her or not, this might be one of those things she has to give me, to let me have my way of dealing with it, as well. It has to work both ways. Maybe because I don’t give in, that’s why it works.”

And although he’ll continue to encourage Heather to attend support groups, Jason won’t be attending, anymore.

“I’m okay with it,” Heather says. “If I do go, it’s with my ILST (Independent Life Skills Trainer). She’s used to it. It doesn’t break her heart to see somebody new. It does to Jason.”

Says Jason, “I just want to come home from a hard day’s work, hang out with my family, and do something. I don’t want it to be about brain injury this and brain injury that. I’m trying to put it behind me. Unfortunately, I do remember even though she doesn’t, so every time it comes up, I’m reliving it. My saying I don’t want to talk about it is also my way of keeping this marriage together.”

Windham resident Patricia Hall, 32, says that in some respects, the brain injury can be more difficult for the spouse than for the injured.

Patricia’s husband Eric, 34, suffered a traumatic brain injury August 28, 2011, the day Hurricane Irene hit Connecticut. He was on a ladder cutting down limbs from a black walnut tree damaged by Irene when a branch fell on his head and knocked him off the ladder.

“I looked over and he was just falling,” Patricia says. “He landed on the limb he’d just cut.”

For two and a half weeks, he lay unconscious in the hospital, with Patricia visiting him daily after taking their two sons, 6 and 8 years old, to school. She didn’t know whether he would wake up, whether he would be the same, or whether he would still love her or even remember her.

“When I woke up, I didn’t think, ‘Where is someone I know?’ It wasn’t a concern to me. The only problem I had was when I was coming off the pain medication,” Eric says. “I think Trish and everyone else suffered more.”

Eric, formerly a truck driver, has healed remarkably fast, Patricia says. About seven months after the accident, he began work at Asplundh Tree Expert Co., where he made foreman in just under his 90-day goal.

Like Heather, Eric sounds normal when he speaks. He shows no outward signs of being injured. Also like Heather, he has some short-term memory issues and mood swings, or what Patricia refers to at one point as “anger fits.”

“It’s stupid stuff, like going at the kids, saying ‘Don’t do this, don’t do that,’” she says. “He doesn’t realize he’s doing it until I say, ‘Hey, this is how you’re acting.’ I feel like I’m always parenting him, because I feel like he doesn’t always make the right decisions. But he’s learning.”

The crankiness isn’t constant, but it is one of the small changes that has entered their relationship. Another change is the way they talk. Conversations that were once engaging are now short and to the point.

But that doesn’t mean they aren’t communicating.

“I think that’s a huge, huge way to survive this, is communicate, talk about your feelings,” Patricia says. “I have to ask him questions, because he’s not going to come out and tell me.”

Although she will have days, now and then, when she gets tired and frustrated and wonders why this had to happen to her husband, Patricia says she’s always quickly reminded of how grateful she is for what she has: her husband, her family, a support system, and a situation that could have been a lot worse—even if it’s still not entirely normal.

“There’s no such thing as ‘normal,’” Patricia says with a slight laugh. “I would always say in the hospital, ‘Is he going to be back to normal?’ And they would chuckle and say, ‘There’s no such thing as normal, now. You have a traumatic brain injury spouse. Things are not ever going to be ‘normal.’ So, our life will never be normal again, and I’m okay with that. We’re crazy and intense and we love each other. I’m still here. I can’t see myself anywhere else.”

For assistance, information, or resources related to traumatic brain injury in states other than Connecticut, please visit the Brain Injury Association of America.