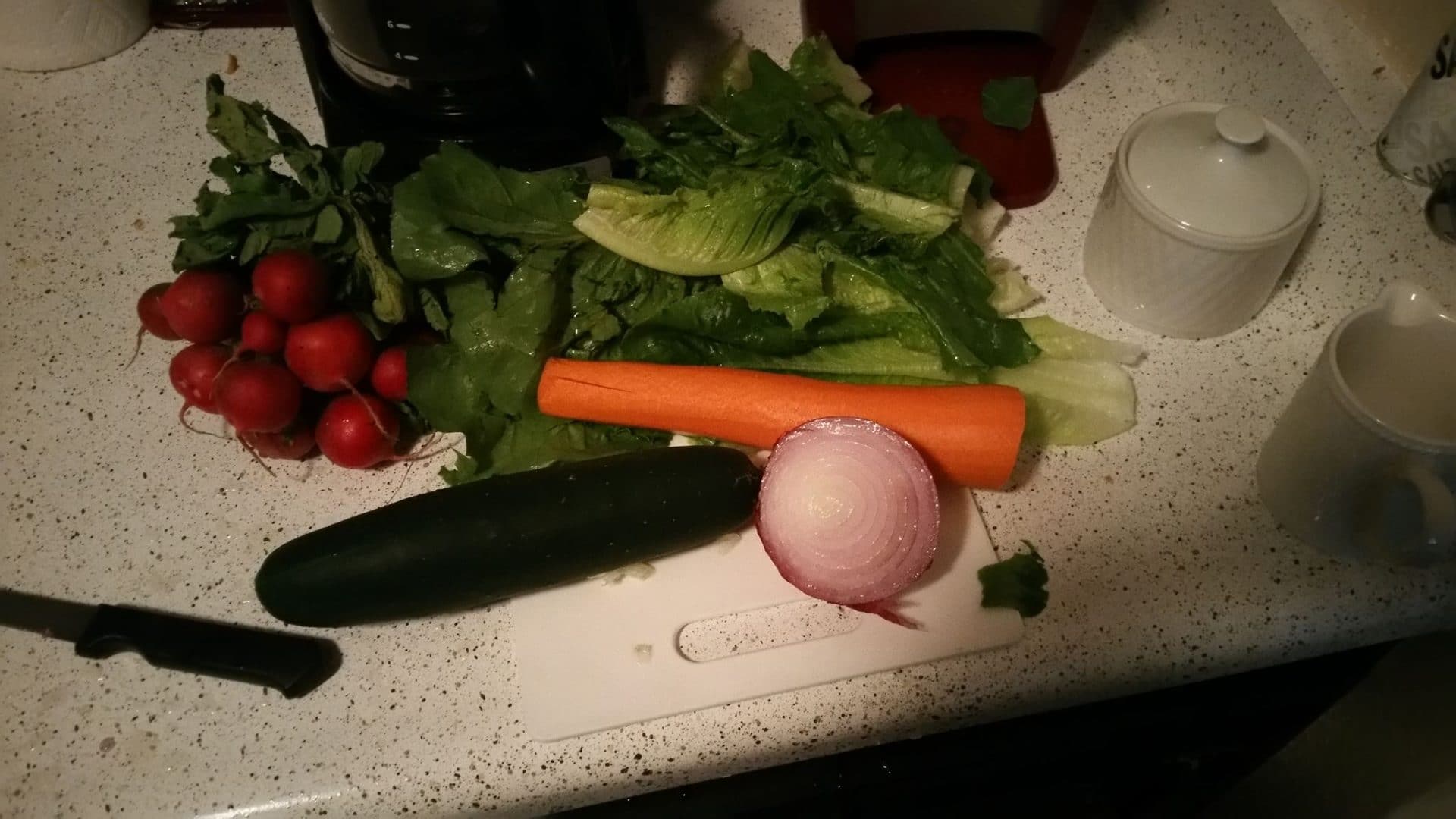 As a salad addict (I get a hankering if I go more than two days without one), I was recently shocked and awed to discover from a Facebook post made by Marko F., 33, that he had just made his first ever from-scratch salad.

“So I did something I’ve never done before. I went to the farmer’s market, got a bunch of veggies, and made a salad from scratch (made much easier with a food processor). Turned out surprisingly well though a couple lessons learned for next time: get three times more lettuce than I thought I’d need, cut the carrots smaller before slicing up, and let the veggies dry a bit after washing.”

Commented one person, “You’ve never made a salad before?”

Okay, he’s had salads before, but he hasn’t made his own.

I still remember getting excited about making my own salad when I was in my twenties after having watched Bridget Fonda make hers on Singles. It looked delicious (even though I noticed during a recent viewing of Singles that her lettuce is wilty, browning, and wholly unappetizing to my inner lettuce judge).

A fresh, from-scratch salad, as any salad lover knows, is far superior to a bagged salad, whose contents are often dry, or bland or assembly-line meh. And the cooler-stocked boxed salads aren’t much better. Their vegetables taste like cold and texture. That’s about it.

Marko was generous enough to let me ask him everything I was dying to know about his first from-scratch salad experience. Please understand: I’m not judging or poking fun at Marko with this interview. I’m a late bloomer, too. I didn’t have my first fish taco until this year (I’m 43), so I understand late starts.

ME: Why have you never made your own from-scratch salad before?

MARKO: Laziness mostly, to be honest. It’s always just so easy to just grab a bag of pre-made salad from the store.

What was it, after years of eating pre-prepped salads, that made you decide, “I’m doing it. Today, I’m getting the vegetables and I’m making my own salad”?

I’ve been wanting to start eating healthier, and I recently purchased a food processor with the intention of using it to slice up fresh veggies to make it much more convenient to eat them. It was just a matter of combining all those chopped up veggies into a big salad, and voila, I’m making my own salad.

You said the salad turned out ‘surprisingly well.’ What did you think would go wrong?

I don’t eat a ton of salads, so I was surprised it tasted good

What inspired you to go to a farmer’s market instead of a grocery store?

I’ve passed by this farmer’s market every day on the way to work and have always thought I should stop by there some time to check it out. And I was pleasantly surprised by how cheap it was–all the ingredients to make my salad cost less than $5.

Were the pre-made salads you bought a) lettuce bags that you added vegetables to, or b) were they full salads (with tomatoes and maybe carrots) in plastic boxes?

I’ve done all sorts of different pre-made salads, from the simple bags of lettuce and veggies to the full deli salads. I really don’t have a favorite company, but I usually tend towards the usual iceberg, carrot, cabbage mix. I always love to add cucumbers to my salads.

Do you have a favorite full pre-prepped salad company/brand that’s your go-to?

I, believe it or not, really like the pre-made salad of a gas station here locally. QT makes a decent southwest salad box which has lettuce mixed with chicken, corn, carrots, cheese  tortilla chips, and even fresh guacamole to add to it.

As a grape tomato addict, I couldn’t help noticing the absence of tomatoes in the picture you shared of your salad. This picture: How did you decide which vegetables to add? Were they the same ones typically added to the pre-mades, or were they vegetables you simply liked, or were you modeling off of a restaurant salad (etc.)?

I just mostly decided to go with veggies that I like the most: a base of romaine lettuce with carrots, radishes, red onions, and cucumbers. All have a strong flavor but not so strong that they overpower say any meat or dressing I want to mix in.

Controversial question: What kind of salad dressing do you use?

How would you compare the flavor of your farmer’s market salad to the pre-made salads?

I thought it was very nice to have a very fresh and crisp salad. The big thing was definitely just how perfectly crisp everything was, with no ingredients wilted or going brown yet. The onion was definitely potent, which is what I like in a good onion. Although I couldn’t eat all I prepared in one sitting so we’ll see how the leftover salad stacks up.

How did you feel about the salad preparation? Did it take too long? Not as long as you thought it would? Was it a hassle, or was it fun? (Some people love cooking prep. I am not one of those people.)

I would say it was a bit of a hassle, but not nearly as bad as I thought it would be. Having a food processor available to chop up the veggies made the process go by fairly quick. The longest part was just washing and chopping the different vegetables down to size and slicing off unwanted bits. The processor took care of everything else as its blades made very quick work of any vegetable I tossed into it.

What vegetable do you never plan to add to any salad, pre-made or from scratch, that many people seem to like in a salad, and why not?

You might hate me after your long spiel on grape tomatoes, but I don’t like tomatoes (at least raw tomatoes), so there are none to be found in my salads.

It’s definitely a texture thing. And that it’s just… a weird, confused, overgrown berry that people treat like a vegetable.

Do you plan to make more salads from scratch (if no, why not)?

Did it feel good – like a personal accomplishment – to make your own salad? I realize this sounds like an offensive question, but I was genuinely pleased with myself for trying that fish taco. (It was good, by the way, and I’ve had another one since. Yay progress! [“Pleased with yourself? He MADE his salad,” Ian said after reading this. “All you did was eat the taco.”])

Like cooking in general, there was a great sense of accomplishment from taking a set of raw ingredients and combining them into something quite tasty. There’s always that fear factor when trying to make something for the first time (especially food) that it might turn out awful. And after all that work and taking my first bite and finding it to be quite tasty, I felt quite a bit of joy from the process. Enough at least that I wanted to share the experience with my online friends.

You said you don’t eat a lot of salads. Has this made you want to eat salad more often, or has it simply convinced you to make your own whenever it is you do have one?

I’m not sure if this will convince me to eat salad more often but it definitely means whenever I have salad I’m going to do my darndest to make it fresh and the best possible salad I can have.

Thank you, Marko! I’m excited about your introduction to the true goodness of the delicious salad. I can almost promise it’ll grow on you and become something you simply MUST have.