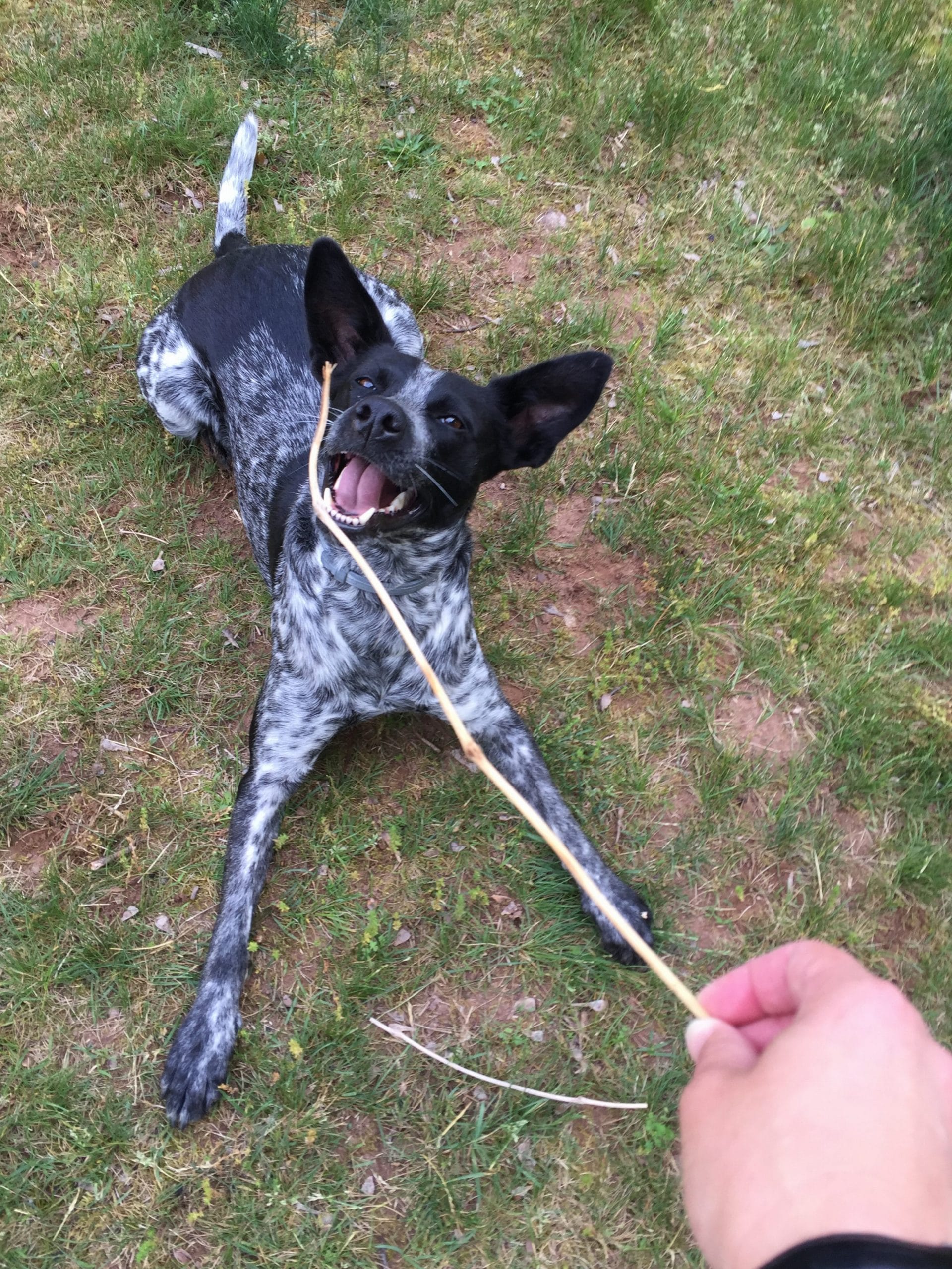 People who take home shelter dogs will often say, “I didn’t rescue my dog. My dog rescued me.”

Since my recent escape to hotel mountain for a break from the ridiculous amount of stress caused entirely by our new rescue dog, Lenny, and not at all by my own anxieties or insecurities, I have fallen passionately in love with her. Everything she does is cute. When she looks at my eyes instead of at my treat-filled hand: so cute I want to hug her face off. When she slow licks her lips in sleep: cute! The way she power sits and alternately lifts her front paws in an antsy little dance we call “happy feet”: this has the potential to eventually kill both Ian (my husband) and me.

We’ve only had her three months and we already have four nicknames for her: Lenny-Lou, Lenny-Bagels (that’s her mafioso name, obviously), Lenny-Cakes, and Jar-Jar Binks.

All of the above is lovely and feels rainbow nice, but Lenny hasn’t rescued anyone. She’s actually done more damage than good.

Before Lenny was brought against her will into our lives and our house, I had a schedule. (“You’re so rigid,” Ian recently joked unfunnily.) Since Lenny’s arrival, that schedule is no more, and I’ve gone wild. I’ll forget to eat breakfast. I’ll pass writing windows. I’ll wonder how it’s 5:30 and I haven’t poured a glass of wine.

(“Dogs operate better when they have a routine they can rely on,” said a trainer we consulted at one point. Apparently I’m a lot like a dog, that way.)

Lenny has also forced me to confront things about myself I’m not proud of.

A few minutes ago I looked out the upstairs window to check on our sweet-souled dog left to play in the yard. Her tail wagged happily and her paws slapped at the gra…

Nope, nope, not at the grass. At a squirrel, twitching on the ground in front of Lenny’s open, “smiling” mouth.

This is not the kind of thing that brings me joy (even if I did burst a little at Oh look how excited she is!), because almost no creature’s pain brings me joy. I ran down the stairs and opened the door to the deck, prepared to … I don’t know. Do something.

Not cross the deck and risk standing where I might be able to see the squirrel, that’s for sure.

Better to stay where I was, stuck in the open doorway, and call Lenny in from there.

Proud dog mommy me would like to announce how good Lenny was at going (visibly) against her instinct to stay with her prize. Ashamed human being me has to admit that I still don’t know the fate of the squirrel.

I can thank Lenny for forcing me to acknowledge that I’m apparently the kind of person who says “I love animals” but who absolutely will not go out to the yard to find out whether the squirrel is alive–because what if it is? I can’t kill it. Is it “love” to let the poor thing (possibly) writhe in agony because “I don’t wanna”? (I wouldn’t even know how to kill it. What, put a .22 to its head? That’s probably right, isn’t it.)

Love (or a lack of it) is why I’m not going back out there until after Ian gets home and pokes around (and possibly euthanizes something or other). I “love” animals in general–by this I mean if I wake up at three in the morning I’ll sometimes, and for no good reason other than that the hour inspires self-torment, agonize over the bad things people do to them–but I don’t love that squirrel in particular, so clearly there’s a certain measure of selfishness that permits me to (potentially) allow it to suffer (it might already be dead – I don’t know!).

However, if I thought Lenny were suffering somewhere, I would definitely check on her. That’s love-love. The other “love” isn’t love, but affection, and it has a line most of us don’t care enough to cross: “It truly hurts me to see you hurting, but no, I don’t think I’ll be doing anything to make your hurting go away. Reasons may vary.”

You might argue that having been given the opportunity to feel this love for Lenny is her “rescue,” but there was already plenty of love in the house before she got here. Ian and I were fine, even kissing and hugging on occasion, and we had three cats. We didn’t need something else to love us. I suppose this is where Lenny, through no fault of her own, failed at a reciprocal rescue: We didn’t adopt her for the reason most often hailed as the greatest reward of being a dog-caretaker and the very best reason in the world to get a dog:

This is what I hear when people say they want the unconditional love of dogs: “If you punch them in the nose, they’ll still greet you when you come home the next day!” Isn’t that the appeal of “unconditional” love, to know we can be unbelievable assholes and still be loved by someone or something, whether a spouse, dog, or god? Otherwise, why would the “unconditional” qualifier be so meaningful? Why wouldn’t we just use the word “love”?

Why should their love be unconditional when ours isn’t?

I had a hard time truly liking Lenny until very recently, simply because I was convinced she didn’t like me. She didn’t wag her entire body at me and lick my face the way she does with Ian. She’d give me side-eye or ignore me when I said her name. She did a lot of things dogs do that mean little, but that I took personally because, as we all know from movie dogs, unless you’re a bad person your dog will ADORE you. Lenny was supposed to go crazy over me if I left for ten minutes, wasn’t she? Wasn’t she supposed to want to sit with me and follow me and lie next to me on the couch? How could I care about a dog who wouldn’t even notice if I stopped coming around? How was I supposed to feel about myself when I was a person a dog didn’t love?

For three weeks I had so little self-esteem I was convinced even Ian didn’t like me. “Why do you look so bored when I’m talking?” I asked him one day. Another day I was convinced everything I did annoyed him and that he secretly wished he’d married someone more lovable.

With all that pressure on Lenny to give me what TV and movies said she was supposed to give any halfway decent person who fed her twice a day, it’s no wonder she taunted me with side-eye.

And thank goodness she isn’t the fabled unconditionally loving dog. Not only because I don’t believe* there is such a thing as “unconditional love” (dependence or obsession, sure), but also because that would be a selfish, unrealistic, but most of all lazy demand no different from having a child “so I can have someone who loves me unconditionally.” (Way to burden that kid.) Who wants love that isn’t earned?

I’d initially figured I was earning Lenny’s love by smothering her. “Love me!” I would scream internally any time I pet her, hugged her, fed her, brushed her, walked her, smiled at her, looked at her. “What am I doing wrong? What kind of person should I pretend to be so you’ll like me?”

And then I’d remember what everyone who knows dogs would say about their ability to read a person’s energy, and I’d panic. “She knows I’m desperate! I’m smothering her! She knows I’m thinking this right now!”

“She’s just a dog,” Ian said a few days ago. This was after I told him my feelings were hurt by Lenny’s reactions to me vs her reactions to him. He said, “She could be picked up by someone tomorrow and go home with them, be treated well, and never give us a second thought.”

I don’t know if that’s entirely true, but it did help lock into place what I’d been trying to remember (and remember and remember) about what I knew, having had cats, about my role as a caretaker and the behavior of love, which is a , short list:

1. Take good care of the animal/give her a good life.

2. Enjoy her for who and what she is, not for what she gives or doesn’t give (unless she’s an evil, biting beast, because no one can love that dog).

I think she likes me more since I stopped caring about whether she likes me. And now that I’m not focused on her feelings for me, I’ve come to love her so much that, if I had to, I think I could shoot her in her cute, meaty little head.

*Excluding the love many parents feel for their children.

4 thoughts on “Learning Lenny: Rescue as rescuer and “unconditional love””